They are starting the groundwork on that casino, but two more casinos may get permission to build.  The lead person on the Oxford project has a name that just jumped out at me: Clyde Barrows.  Does that remind you of anyone?  It might, of the couple Bonnie and Clyde, that Clyde was Clyde Barrows.  So now we may have him in charge of a whole bunch of money!  No, I realize it's not the same guy!
The "original" Bonnie and Clyde were born in 1909 and 1910, of course they both died on the same day May 23, 1934.
Bonnie Elizabeth Parker never dated until her third year of high school, and she married early, was separated but never divorced.
Clyde Chestnut Barrow grew up in an incredably poor family, they lived under a wagon after losing their farm, he considered himself a lucky guy when he met Bonnie, sometime after his first few holdups.
Clyde and Bonnie got together in 1931, and did not primarily rob banks; instead they robbed stores and gas stations (there were more of them).  They shot nine law officers, for no real reason, and gun down a lot of their victims.
While in high school Bonnin wrote poetry (she wrote quite a few); as an adult she penned a poem  titled "The Trails End" the words of which, slightly altered, became the song "The Ledgend of Bonnie and Clyde" 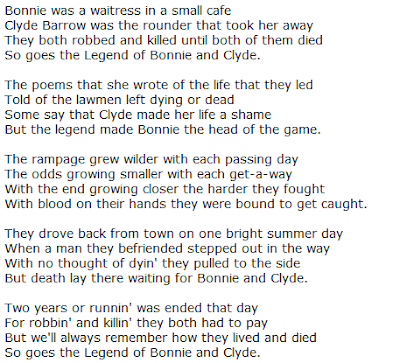 Prophacy right there, am I right?